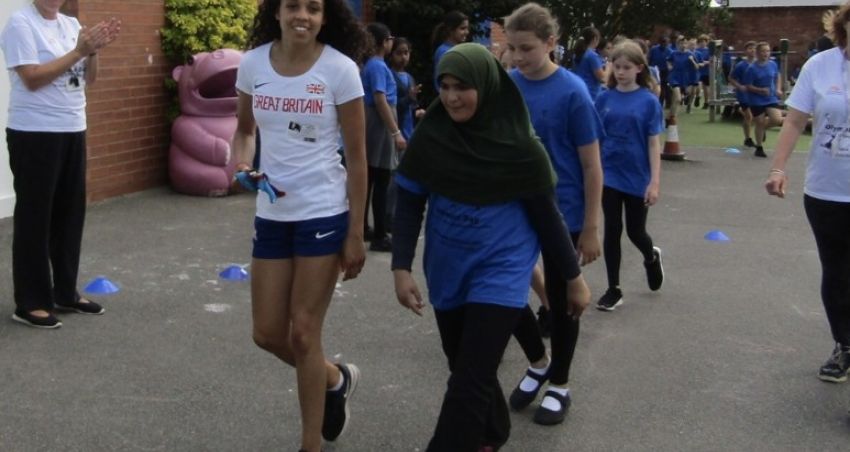 Pupils from schools across the East Midlands Academy Trust have clocked up a staggering 5,885 miles – the distance from the UK to Tokyo – to celebrate the upcoming Tokyo 2021 Olympics.

Around 5,000 pupils and staff from the Trust’s seven schools including Prince William School in Oundle took part in the challenge, equating to about a mile each, with some choosing to walk their distance and others running it.

Some of the schools saw a special appearance from Olympic athletes, 400m runner Lily Beckford and sprinter Rion Pierre, who came along to cheer on and inspire the pupils as they put in their steps.

The final mile of the Walk to Tokyo will be completed at the Trust’s Olympic Day event, supported by the GB Olympian Association, which will take place next Wednesday (June 23rd) at its partner school The Harefield Academy.

The Olympic Day will see teams of pupils from each school compete in a huge inter-school athletics competition and will be attended by Olympians Joslyn Hoyte-Smith, Bronze medal-winning relay runner at Moscow 1980 and chair of the GB Olympian Association, runners Marilyn Okoro and Louise Collins, and volleyball player Peter Bakare.

Joshua Coleman, EMAT chief executive, said: “Our Walk to Tokyo has been a fantastic challenge for our pupils across the Trust and a wonderful way to get them excited ahead of our Olympic Day event, for which we’re delighted to have the support of the GB Olympian Association.

“Physical activity has always been a priority for our schools and it’s never been more important than during the recent pandemic, when many of us have seen an impact on our health and mental wellbeing.

“I’m so proud of our pupils for their efforts in this mammoth challenge and I can’t wait to see the culmination of our Walk to Tokyo with the final mile being completed at our Olympic Day next week.”